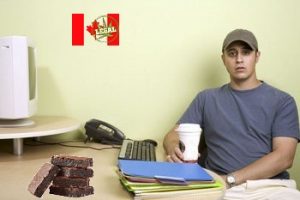 On October 17, Canada became the second country in the world (after Uruguay) to legalize the production, sale and consumption of Marijuana.

In addition to the obvious product, there is a lot of creativity involved in newer merchandise – it is much more than just ‘brownies’. There will be many new edible products, a marijuana infused beer, a Bed & Bud (this bud’s for you), even a cannabis energy drink. (Yes, a bit of a paradox.)

On October 18, Canada became the first country home to a call centre where the consumption of cannabis on the job was condoned and acceptable. (No smoking at your desk, but like we said, creative edible products.)

On the very same day, Canada became the first country to close down a call centre where cannabis was condoned and acceptable. Three employees had been hired but only one reported for work, two hours late. He made his first, last and only call starting at 11:23 and finishing 27 minutes later. He broke for a ‘coffee break’ and did not return to the office.

Here is a recording of the call. It was much longer, but we’ve edited out the dead space.

Mr. Kurt Nodd, Director of Human Resources for ICPC (International Centre for Professional Collections) declined comment when asked about the rumour that the position of Collection Manager at the call centre had been offered to the ‘publicly unidentified’ accounts payable representative heard in the taped call.

The fictional call centre is no more and Mr. Nodd has returned to Human Resources and Andy…well, your guess is as good as mine. However, I have heard ‘real’ collection calls that were as ineffective as this one. Granted, the collector did not send them a cheque, but they didn’t collect any money either.

Not their fault. They did not have the training. It is not rocket science, but it is an art and a science. It is what we do.