How Would Nelson Mandela Collect 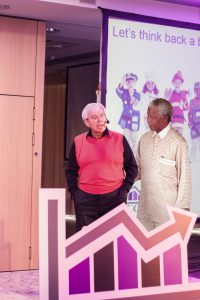 Who is standing beside Tim Paulsen? Me on the platform with Mr. Mandela, I wish!

How Would Nelson Mandela Collect a Past-Due Invoice?

I had a dream, not only to meet Nelson Mandela but to appear on the same platform. Well, it w

ill have to remain a dream. Please note the ‘I wish’ in the caption and the date of April First. With his passing some years back, I will never have the chance to meet this exceptional man. Maybe it is for the best.

Zelda La Grange, a private secretary to Mr. Mandela wrote that he was attentive to people’s weight and health. On more than one occasion, he would ask someone to stay back for a private discussion. He would point to their tummy when others left and tell them they ‘have to reduce’. Zelda and other staff would have tried to discourage the person from staying, but who is not going to stay for a private discussion with Mr. Mandela? Not me! I am a veteran of the Battle of the Bulge, have been ever since about grade five. The horror! Mr. Mandela asks me to stay for a private conversation, what am I going to tell my friends or family afterwards? If I was quick enough on my feet, I might say the conversation was confidential, I just don’t see how I could tell them Mr. Mandela said I was a ‘porker’ and would ‘have to reduce’.

In almost every other area, Nelson Mandela was much more diplomatic and even circumspect. While a prisoner in South Africa, he learned the language and the culture of his jailers. He became somewhat of an expert on the sport of rugby, in particular the Springboks, greatly supported by the white minority in South Africa. When you can have a conversation with your jailer and others about sports and other aspects of culture, the negotiating table evolves from square to round.

So, how would Mr. Mandela collect a past-due invoice?

“I never lose. I either win or I learn.”
Nelson Mandela

Want to know more about the full book, “How Would Confucius Collect a Past-Due Invoice? How Would Donald Trump?”