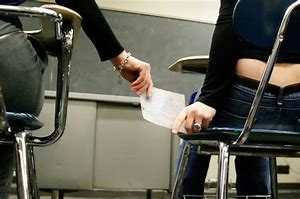 Cheating
for
Fun and Profit!

Seems to me we should be teaching our kids more than the eleventh commandment: ‘thou shall not get caught’. They could have saved some money and a lot of embarrassment if they just followed the Donald Trump example, which is to boast of finishing first in your class?

My earliest years in school were at Sacred Heart in the South side of Chicago, so I didn’t cheat much. Not because of any moral high ground or lessons taught, but the simple fear factor. If you ever saw Sister Mary Hamilton, ruler in her hand, striding towards you at full steam, you would know what I mean.

Mind you, once in grade five, now in Northern Indiana and well away from the memorable Sister Hamilton, I snuck in some notes for a spelling bee. It resulted in a third-place finish. It may have been the highlight of my academic career, and wouldn’t be surprised if Mom still has the certificate.

But, supposing ‘cheating’, was not only allowed, but encouraged, and, good for you?

A unique professor in a Canadian College told his students they could cheat on an exam by bringing in one single piece of regular size paper. On their ‘cheat sheet’, his words, they could put all the information and formulas they wanted? They could use both sides of course, type, write, it didn’t matter, but the one page only. Care to guess how well they did in the exam?

It doesn’t matter. It tuns out the professor didn’t even record the results. Where these students excelled, for many years to come, was any testing on the topic after that exam.

When you think about it for a moment, it makes perfect sense. They had to do an incredible amount of studying in general and then to concentrate on the most important and salient information of the program. They could not just ‘memorize’ information, they had to translate and convert.

In my recent book, ‘The Reluctant Collector’, the mysterious lemonade salesman is counselling a young man who must either accept a transfer to Accounts Receivable or he is out of a job. He gave him a napkin to distill and record the important instructions and then to place it up on the wall by his telephone. Kevin, the ‘reluctant collector’ in the story, must concentrate on what is truly important and let the rest slide.

Though I’m not sure the good Sister Mary Hamilton would approve but a certain professor would give it two thumbs up.