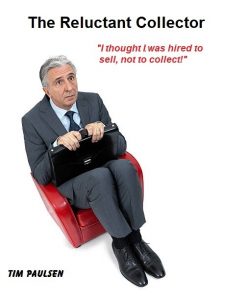 How to be wildly successful when your ‘other duties as required’ include accounts receivable.

Allow me to present three reluctant collectors for your consideration:

“We’re making some changes,” Sally was informed when she sat down in the manager’s office. She began to rise out of her chair, protesting, “But my numbers…” Peter, her sales manager held up both hands to stop her. “Your numbers are great,” he said. “The changes are to the folks that worked in receivables.”

“What does collections have to do with me…I mean us, here in the sales department?”

“Starting on Monday, quite a lot. All the folks who worked in receivables are being reassigned. That department will only be sending out the invoices and answering basic queries from Customers. Any and all necessary contact to collect on a past due invoice will be our responsibility, more specifically yours – for your customers.”

“You can’t be serious,” Sally said.

She knew that Peter was serious when he said nothing.

“But,” she protested, “my skills are in selling, it’s what I’ve done since graduation. I don’t know anything about collecting. It has never been the responsibility of sales.”

Kevin has just accepted the job offer as Account Executive for Nordic Frabistat. He was excited about the product and working for what everyone said was a progressive company with a cutting-edge product. His potential for additional earnings thru commission and profit sharing had his heart racing, but that same heart seemed to miss a beat when his new manager, while shaking his hand to welcome him aboard said, “By the way, one of your responsibilities will be to follow up with your customers and ensure payment is received after you make the sale. That won’t be a problem, will it?”

With a bit of effort, Kevin managed to keep his smile in place and shake his head. He asked himself, “Is he asking me to collect?”

Lying in the bed you made

There was a serious change in the economy and the real estate market. Turn-around specialist, Kurt Nodd, was brought in to try and save Nerdey Trust. At the end of his first week, he fired 50% of the sales team for mortgages and now had the rest of them standing in a meeting room. (No chairs were provided.)

“You people were involved in hitting a lot of sales targets for mortgages over the last few months and years. Many of you bought second cars or paid off your own mortgage based on the commissions you earned. Now, a lot of those approvals are coming back to bite us on the behind. There are a lot of factors involved, but I don’t care.

Our job right now is to do everything we can to collect on the sales that were made. Nobody knows these customers more than you do. You can bring out your business cards right now and cross off sales representative, account manager or whatever you may have under your name and write in Collector, cause that’s what you’re going to be for the next six months – minimum.”

Management by objectives was popularized by Peter Drucker back in 1954. The premise is deceptively simple and often effective. First, provide a clear target (objective). It should be something that can achieve, but it should be a stretch. Second, reward them for achieving the target.

The difficulty, the challenge, the rub if you will, for overall success is that in this case, the sales individual or department may achieve their objective in spite of and sometimes at the cost of the objectives for the receivables department. And of course, vice-versa.

People, as pointed out so well in Dr. Lebouf’s book ‘The Greatest Management Principle in the World’, will do what you reward. Not what you want and not what you ask for – but what you reward. Write that down, memorize it. Whenever you see unusual behavior, not only in business but most areas of life, Lebouf’s Principle comes into play. The results in almost any organization is a conflict between sales and the credit/collection function. Sometimes it’s downright nasty and at other times it is healthy and out in the open, but it is always there. Some people in credit ask Whose side are they on? about the sales team. In turn, they have been known to refer to credit/collection as the sales prevention department.

All in the same boat? Well, yes, but on your winning hockey team you will have skilled defensemen and forwards. The goal is winning but they do have specific responsibilities.  When push comes to shove, as it so often does in the game of hockey, you better have some two-way players if you want long term success.

There may be a lot of reasons what a sales representative is called upon to collect a past due invoice. However, there is one and only one action to be taken and that is to complete the sale.

This means that everyone in the firm, everyone, is involved in sales or they support the people who sell. The selling may be at the early ‘bring in the order’ stage or later, completing the sale with a satisfied and up to date customer.

In sales, you may have many Customers who welcome your visit and your calls. Nobody, I don’t care how good you are, is happy to get a call from a collector. Let’s face it, in the past, one may not have stressed the payment terms but now must ensure they are not only understood, but followed thru as agreed. Then, when paid, you want the Customer to be happy enough that they will still want to buy your product and service. Talk about being pulled in different directions? Remember we mentioned ‘push coming to shove’?

It is quite the challenge, but achievable, we believe, when you know and follow SIX GUIDELINES: