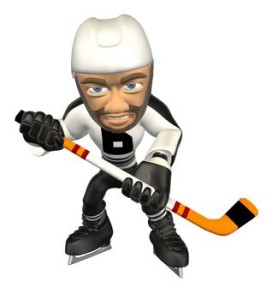 By the time they reach the National Hockey League, players have spent a lot of time on the ice. Many started skating at five or six years old. At that point, they know ‘how’ to skate, but you can teach them how to skate better and that’s what Power Skating is all about.

A popular television show (at least in Canada) is Battle of the Blades, a reality show of hockey players paired with prominent figure skaters. But the figure skaters and their coaches have been improving the level of hockey for quite a few years now. Power Skating  is not only an offshoot of figure skating, it was invented by a figure skating coach.

There is 50 feet between blue lines in the NHL (about 15 meters) and being able to skate between them even one foot faster may not sound like much, but it is a HUGE advantage in professional hockey.

I expect most of you reading this know ‘ how’ to collect. This may not be our first rodeo, but as Kim Muir of “Can’t Skate – Can’t Play” says, ‘you don’t teach the basic skating skills, but high end skating to improve your game”. (I would add that you can trip over the blue line or reach it before the next guy – choice is yours.).

It is that time of year when we may have set goals for ourselves and as it is now a full week since New Year’s Day; odds are we’ve broken a few resolutions by now.

So what? Failure isn’t falling down, it is not getting back up.

Suppose…just suppose that you were able to make any one of the following changes over the next six months.

There is a story often told in Canada about the two young men who were going to go for a walk in the woods. “Hold on a minute,” one of them said, as he was putting on his running shoes, “there may be some bears in the woods.” His friend laughed and said that nobody can outrun a bear. “I don’t have to out run a bear was the reply, just you!”

You get the idea, it doesn’t take much. The economy is tough out but it what an advantage it would be to reach the other side 1 foot ahead of the competition!

Pithy quote of the month:

“The greatest advantage your company may have over your competition may very well be…you!”
…Tim Paulsen