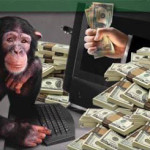 Not long ago, it was my pleasure to work in Poland with Borys Sadowski and some of his great team from GEKKO Collections. A lot of their work is in the consumer environment where time spent on a collection call is critical. Borys and his team do not teach people how to make a shorter call, but rather how to ensure every second of the call is useful. (Yes, that does tend to make it shorter than the average, but that is not the true objective.) It may be ‘listening’ to details, asking additional questions or making a comment or two. If it is not related to resolution of the situation it is ‘just noise’.

Some calls may be longer than an average expected but sometimes you have to join the circus, take ownership of the monkey – really see it from the other side, in order to best resolve the situation.

In other situations, you don’t want ownership of the monkey at all and I think it is covered best by a friend and associate Declan Flood from Irish Credit Management Training and The Association of Credit Professionals. I have taken the liberty of ‘lifting’ his article to a book titled “Mentorship”.

Early in my credit career (wrote Declan), while still young and inexperienced, I attended a sales training course. One of the exercises they got us to do was to write down the direction we wanted our career to go. Even though it was over thirty years ago I remember writing “To be recognised as the number one credit professional in Ireland.” I don’t know if it was the clarity, the simplicity or just the fact that I wrote it down but that simple sentence has shaped my career since then and depending on who you talk to, there are times when I think I have achieved that goal.

My methods were simple; I first completed a three year Diploma course with the Institute of Credit Control in Ireland and as soon as that was complete embarked on a one year management course in the Irish Management Institute. The thinking here was that with four years’ credit experience, combined with two qualifications I was on track to land a credit management position.

As you know, sometimes things don’t go fully according to plan! I complained so loudly about the constant problems in the warehouse and distribution area of the business that I was offered a position to manage seven warehouse staff, the distribution and stock control function in addition to my credit control responsibilities.

This was the most difficult role I had ever attempted, and there is a huge difference between learning management on a course and doing it in the real world, to be honest, things got a lot worse before they got better.

I found myself going in early in the morning and coming home increasingly later at night, then the odd Saturday and even Sunday. Before long it was every Saturday and every other Sunday. The funny thing was that it didn’t seem to make a difference and the workload kept coming in waves and I was struggling to keep up. Still my ambition and pride made sure I would never give up and kept going to get on top of the constant issues that kept coming up. As busy as I was, it was fairly obvious that not only were things not getting any better, they were getting worse!

Knowing that something had to be done, not only was I under pressure at work, now I was under pressure at home as well, with two small children that I didn’t see most days and increasing absences at weekends, so desperate times called for desperate measures so I called my management lecturer looking for some advice. She listened to my story and recommended that I read a book. “Read a book!” I said “Read a book? Did you not hear a word I said? I am working eighteen hours a day seven days a week and you want me to read a book!” I couldn’t believe it! Where would I find the time?

I found the time the next Sunday morning, I sat down with a cup of tea and the book called “The One Minute Manager meets the Monkey” and it saved my life!

The reason I am telling this story here is that I hope will be of help to you, as you make the transition into management or even if you are overwhelmed with things to do. There are lots of stories in the book, the one that had the greatest impact on me was the scene where the hassled manager was on their way to a board meeting and met one of their staff in the corridor. The staff member greeted the manager and immediately said “Boss, we have a problem” The boss listened for a moment, learned enough to know that a serious situation had developed and as yet, not knowing enough to make a decision. Now, even later for the board meeting they were going to, backed away with words like “Leave it with me” and headed for the board room.
The board meeting was a blur to the manager, who was thinking and worried about the implications of the meeting in the corridor and then took additional action points from the board meeting and headed back to their office.

As soon as they sat down, there was a knock on the door – the staff member asked “Boss, have you had a chance to do anything about what we spoke about earlier?” The boss apologized and said, “No, sorry, come in we’ll do it now.”

Does this sound familiar? Could you have been in this situation yourself? Would you know how to deal with it?

The boss then brought the 200lb monkey to the Board meeting and probably picked up a number of additional monkeys there and brought them all back to meet the thousands of monkeys that were all over the office in various states of health, some were very sick and others were dying from neglect.

Fact is that if you are a constant “monkey-picker-upper” you will soon be overwhelmed and not able to cope. Fact also is that most credit staff end up with monkeys from every other department.

Very soon I realized this was what I was doing wrong. As my staff members came to me with their monkeys I took them! I took them all, to the point where eighteen hours a day seven days a week weren’t enough to do everything. So I learned how to manage monkeys – simple! As manager, all I have to do is to define the next step for my staff and allow them to keep the monkey! So, in the corridor, instead of saying “leave it with me” if the manager said “Can you write a single page outlining how the problem occurred and include two or three possible solutions?” That way the staff member leaves with the problem and the tools to deal with it. Then on returning from the board meeting, the manager would go to their office via the staff member’s desk to enquire how they got on with it. Chances are, 9 out of 10 times the problem will be resolved at that stage.

The manager can then enjoy working in a monkey free environment.

For me, in case you are interested, as soon as I finished the book, I went to the office for the last Sunday ever. Took my big pile of papers and turned it into eight little piles, one for me and one each for the guys in the warehouse. First thing on Monday morning, I called each one of them in turn and returned their monkeys to them one by one. As soon as the exercise was complete, I was alone and took a walk to the warehouse, they were all too busy to talk to me. I remember the feeling of finally becoming a manager in the true sense of the word, a manager that would never again take monkeys away from my staff, but help them to deal with them by simply defining the next step.

Monkeys can be action points, emails, pieces of paper, appointments, tasks or problems and as soon as you recognise them and learn how to deal with them you can begin to focus on the most important things and begin to make a real contribution to your organization.

I hope by reading this story and implementing the lesson you will come to realize your potential as a great manager, I would love to hear your story of how you made this simple lesson work for you.

The lessons are:
1. Know what you want
2. Write down your goals
3. Be careful what you wish for, it just might happen!
4. See “monkeys” at all times
5. Delegate “monkeys” to the lowest possible level
6. Keep your workspace “monkey” free
7. Life is short, enjoy what you do.

If you liked Declan’s story, you may enjoy others in the free book in development. Click here for details.

Whether you take ownership of the monkey or not, some of the rules published by the Forests & Wildlife Department Chandigarh Administration may be helpful:

• Do not make direct eye contact with monkeys.
• Do not cross the path between a mother and her infant
• Don’t irritate or tease monkeys
• Do not feed the monkeys
• Do not get scared if a monkey makes a ‘kho-kho’ noise. Normally it is a bluff. Ignore the monkey and walk away calmly.

Stay calm in the unfortunate and unlikely event that you are attacked. If the monkey charges you, don’t fight back. The monkey can run, jump and climb better than you. Find something to get in between you and the monkey–a garbage can lid, a car or a steel door, anything you have that works.

Protect yourself by barricading yourself somewhere–a bathroom or building of some sort, your car. Anything safe and secure should be fine. Unless you’ve really angered or annoyed the monkey, it should lose interest within minutes and go away.

• Learn what keeps monkeys away – the presence of big dogs and snakes. Keep realistic plastic ones on the roof tops or boundary wall of your house. (That’s for snakes, go for the real dog if you can.)
• If a monkey tries to touch you, gently put an object or board firmly between you & monkey.

Pithy Quote of the Month:
“One monkey don’t stop no show!”

I swear by that old expression, ‘One monkey don’t stop no show!’ The reality is, we still have some good men out there, and we should hail those men as the kings they are.
Angie Stone