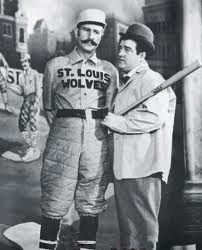 Abbot and Costello - Classic 'Who's on first?"

In an episode of the television series, West Wing, one of the characters says, “You have to choose one of two players for your baseball team. Their time running to first base is identical. One of them has perfect form, the other, arms and legs akimbo, far from it. Who do you pick?”

The right answer is the player with the ‘not so perfect form’.  After all, if they can tie someone who runs perfectly, imagine what they could do with improved form and technique!

Perhaps you have someone on your collection team who ‘gets the job done’, but with imperfect form or there are tasks you perform that are “o.k.” but just imagine the results if you gave a few of them the time they need?

“The closest to perfection you will get from a customer is when they fill out a credit application.”
Tim Paulsen